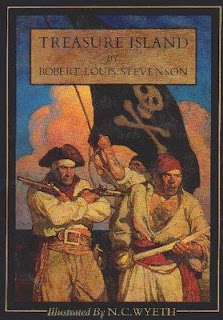 Illustration for the Book Treasure Island
by Robert Louis Stevenson
Illustrated by N.C. Wyeth
Image Source Wikimedia Commons-Public Domain
Sadly, Andrew Wyeth passed away today at age 91, and considering I already wrote a post about him in December 2008, I thought it would be a good idea to write something about his father, Newell Convers Wyeth.

I am including this in my series of My Favorite Artists. Although I was not familiar with his work until I did my research for the post on Andrew Wyeth. I think his work understandably had an influence on Andrew, and without doubt N. C. Wyeth had a great influence on American Illustration in general.

N. C. Wyeth 1882-1945, was born in Needham Massachusetts and was a pupil of renowned illustrator Howard Pyle, who was considered the father of American illustration. He was an accomplished watercolor painter by the age of 12, and attended Mechanics Art School to learn drafting, Massachusetts Normal Arts School, and later the Eric Pape School of Art to learn illustration.

His first commissioned work was a cover for The Saturday Evening Post, and after another commission for the same magazine, was urged in 1904 to go west by Howard Pyle to gain direct knowledge and experience of the subjects he was using for his illustrations. Over a period of two years, he travelled through the west taking on various jobs, and soaking up the environment of Cowboys and Indians in the wild wild west which added a dynamic, romantic flavor to his work.

Over his career Wyeth managed to complete over 3,000 paintings and illustrations, and did artworks for books such as Treasure Island, Kidnapped, Robin Hood, The Last of the Mohican's, and also did work for magazines such as Century, Harper's, Ladies Home Journal, and Scribner's.
As if that was not enough, he also did posters, calendars, and advertisements for Lucky Strike, Cream of Wheat, and Coca Cola.

By 1914, Wyeth became disenchanted with commercial art, and thereafter had an internal struggle, as he thought the work he was doing only served his publisher masters wishes, and their desires to satisfy the needs of the buying public, and the limitations of the printing processes of those times. However he did make a successful living at it, and managed to raise a family on his income form his illustration work.

After sifting through images of his work for a couple of hours, I am amazed at his use of color, and his strong sense of design and composition in his work. His illustrations give you the feeling of actually being there, even looking at them today. The way that he painted clouds impressed me perhaps the most. The shapes and the colors, the lights and the darks are in my mind just perfect.


Posted by Terry Krysak at 6:27 PM No comments: Links to this post 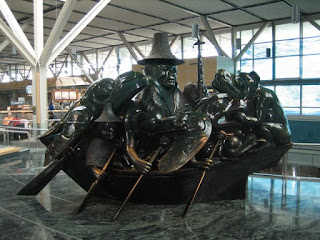 Jade Canoe-Bronze Sculpture
by Bill Reid 1920-1998
photo (c) Terry Krysak
Bill Reid another of My Favorite Artists was a Canadian artist whose father was of European descent, and his mother was a First Nations Haida aboriginal. Reid was profoundly influenced by his paternal grandfather Charles Edenshaw, a renowned Haida artist carver.

Reid became interested in Haida art while he was a radio announcer in Toronto, and studying jewelry making. In 1951 he returned to Vancouver, and began studying the work of Edenshaw, as well as visiting the remains of Haida villages on the Queen Charlotte Islands, and ultimately was responsible for helping to put together a small replica of a Haida village located in the UBC Museum of Anthropology.

The Jade Canoe as shown above (located at Vancouver International Airport) is a representation of an ancient Haida dugout canoe, bearing thirteen supernatural creatures, each in some way related to the Haida's mythical past. For many centuries the Haida people lived in a rich fulfilled existence, nourished by the wealth of their homeland, and watched over by the gods and demigods who peopled their world. 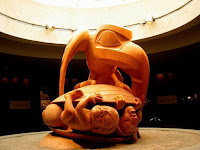 Raven And The First Men
by Bill Reid
Cedar Sculpture
I have always been fascinated by the art of the Haida, and Bill Reid has succeeded in taking this art form to an entirely new level by taking classical Haida imagery, and transforming and morphing it into three dimensional sculptures that would be the envy of many famous sculptors. His use of cedar, and eventually bronze has proven to be an enormous achievement, and has left us with many fantastic works of art that grace our communities for all to see.

Posted by Terry Krysak at 9:21 PM No comments: Links to this post 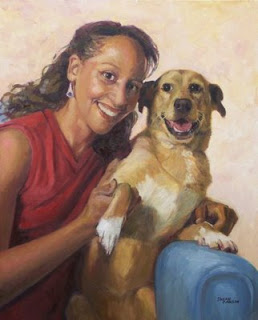 Companions, Oil Painting
16 x 20
(c) Susan Carlin
This is another in my series of My Favorite Artists, featuring the work of Susan Carlin. Susan lives in San Antonio Texas, and paints online live every Tuesday night on Ustream TV at 4:00 pm PST.

Susan began her career one summer when she got a job doing portraits in pastels. Most of the time she paints in oils, and her subject matter includes, landscape, portraits, and still life. Without question she is a masterful oil painter, and skillfully captures not only a likeness in her portraits, but adds a beautiful artistic touch with superb composition skills and a keen eye for color.

After a career as a Chiropractor, Susan now paints full time, and is approached on a regular basis by people for portraits on a commission basis. In addition to that, she also paints live online every Tuesday evening, delighting all of us with her friendly disposition, and cheerful banter about what she is doing. Many times she discusses her techniques, and provides helpful instruction as she chats with viewers while painting, and answering questions about a variety of art subjects.

I have always been amazed by painters like Susan and David Darrow that can paint, and chat with people who are viewing the demonstration. This in my mind takes an enormous amount of superb skills and the ability to pull it off successfully.

If you have a free evening, drop by and join in on the fun. I guarantee you will not be disappointed. If you are a beginner, or accomplished artist you will always learn something new every night.

As an Amazon Associate I earn from qualifying purchases.

Tip Jar if you like what you see, leave a Tip and you will Feel Great

Terry Krysak
Richmond, B.C., Canada
According to my parents, I started drawing when I was a child while laying on the floor in front of the TV. My most memorable exposure to art was in High School, the teacher Mr. McCullogh took me under his wing, taught me everything he knew and nurtured me. After attending The Alberta College of Art and Design in Calgary, Alberta in 1971, art has always in some way been a part of my life. I am retired from the working world, and devoting my energies and time in an effort to become a better artist. You can contact me at tkrysak@gmail.com